I was so impressed by the sunset I saw last time that I brought Peter along. We probably spent at least an hour sitting out on a little pier.

These are the two photos that stand out, but don’t do the scenery justice.

I’ve been told that this is like African Lion Safari in Cambridge, but better. I wouldn’t know. My parents never took me to African Lion Safari when I was a kid. They said the monkeys would crap all over the car and eat the windshield wipers. Can you sense the neglect?

Well, when my parents said the animals might ruin the car, the weren’t too far from the truth. What I didn’t realize when I was taking this photo was that the elephant was taking aim at my open window.

There were plenty of other cool animals, including some big cats that I hadn’t seen before.

In the signs that amuse me category, this one is definitely pretty high on the list. “Hati Hati” means “caution.” Not much more needs to be said.

Peter arrived.  We hung out.  It looks like we didn’t take any photos until we went to the fabric market looking for som material for shirts.

What a beautiful island…

We spent another weekend at the bungalows in Puncak.  This time we had our own car with us, so we were able to go visit the sights.  The weather was comfortable, and because of the occasional rain the view was clear.

It’s actually pretty rare that you can see the volcanos off in the distance.

There’s a ‘convenience store’ across the street outside of the bungalow gate.  I bought coffee from them every morning.  At night, there’s always a group of people hanging out.

I flew Adam Air to Bali.  On my way there the flight was delayed by over an hour.  I didn’t bother to ask questions.  It wasn’t until I boarded the plane that I knew I was in trouble.  I checked the boarding pass when I got on the plane… 14A… Window seat… looks like about half-way back of the plan.  I slowly make my way down the aisle…  Wow, an emergency exit seat.  And I didn’t even ask for it.  Great!  It wasn’t until I went to put my bag overhead that I realized that there were already two seats occupied, and only two seats.  I pull out my ticket again to explain to whoever was occupying my nice big window emergency row seat that I have the pass for 14A.  I start in my broken Bahasa to explain when I look at the sticker and see that 14A doesn’t exist.

Now, I’ve made some corny jokes about flying third class hanging on to the wing (thanks for that gene Dad) but literally 14A would have been just the wrong side of the emergency exit door over the wing.

I wander back up the aisle to a flight attendant who looked at my boarding pass and pointed to where I was planning on sitting.  He was clearly annoyed at my incompetence in not being able to find my seat.  He was clearly confused when I tried to point out that there isn’t a seat.  His response was, “Oh.  Back of plane middle seat.”  Shit.

I tried to squeeze in that non-reclining seat in the middle of the back row.  It wasn’t until the guy next to me pointed out to the flight attendant that my legs were spread so wide that he couldn’t sit in his seat that I was moved again to an aisle seat… which was someone else’s seat.

By this point, children were already sharing a seat.  They actually make a special seatbelt for that.  Two little waist bands clip into the existing seatbelt allowing two small children to share a seat.  This really isn’t a problem because as soon as the plane is airborne the parents let them out to terrorize other parts of the plane.

The guy in front of me also insisted on pushing his seat back as far as it would allow.  I thought he might be sympathetic to my cause as he was a taller white guy, and tried to point out that it was my knee that was stopping him.  All he said was, “Seat back,” and pushed harder.  Wasn’t until later I realized he was French.

Bali is beautiful.  That’s all there is to it.  I sat this afternoon on the beach for an hour.  I chatted a bit with the vendors who kept harassing me.  They’re persistent, but desperate.  Business has been rough since the last Bali Bombing.  The busy Christmas season still left me with 50 meters of shoreline to myself.

Back on the airline topic, I ate the snack that was handed out in a box.  It was a muffin that defied all my preconceived notions of muffins.  Usually they crumble.  Sometimes they’re more cupcake like, but those have crumbs too.  Not these muffins.  You could pull them apart in any direction and they would tear perfectly.  I passed a significant amount of time ripping apart my bright green and orange muffin into different shapes: squares, triangles, canoes.  Each came out perfectly smooth.

Bali was absolutely beautiful.  I will definitely be back very soon. 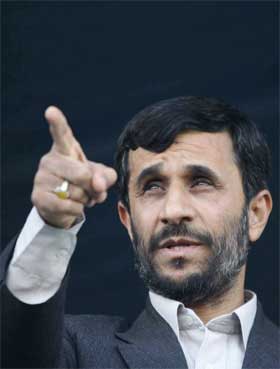 The President of Iran, Mahmoud Ahmedinejad, sends his warm Christmas greetings on his blog, and reminds all women of their place in his world:

If Jesus Christ (peace be upon Him) was present today, he would order an encounter against those who would propagate corruption, obscenity and perversion, and try to nullify and exterminate the merits and the rights of women and diminish their position, a position that virgin Mary (peace be upon Her), is their role model and sample. [link]

Now get back into the kitchen and bake me a pie.

When I started a blog, I thought it would be a cool way to share some of the things I stumble across on this side of the world… sites, experiences, photos…

Instead, I’ve become the guy who blogs about his cat.

We now have a Christmas tree thanks to the kind hearts of Nicki and Judi. Cindy and Dom donated some ornaments.

We tried to make it look like a real tree, but obviously it’s a little short. I’m obviously well supervised in my decorating efforts.

Eventually, we hope the cat grows big enough that he can’t climb everything vertically.

Here he is playing his favourite game of sock tied to string.

Clearly the cat likes our decorating. He’s busy swatting the bells in the tree as I type.

So far, Mr. Durian Jak seems the most appropriate.

Durian… He’s had a little stretch of diarrhea that has left him a very smelly creature. All parties involved hope this passes quickly. Well, here’s a good description of the magical fruit Durian[wikipedia].

Of course, in the future he might prefer a less vile name. Any suggestions? Leave comments.

Right now, he can’t be trusted around feet. For whatever reason, he clamps on to toes. Sometimes he gently bites fingers in play, but he seriously wants to make my toes bleed.

Liz and I are now the proud parents of a new kitten. He’s cute. Sometimes I think we’re both operating on the same level too.

He’s about five weeks old, and was rescued after something happened to mom. Hopefully he turns out well adjusted and healthy. Thankfully he’s already figured out the operation of the litter box.

Liz and I couldn’t resist playing with him this morning before work. Unfortunately, I smelled like smelly cat the whole day.